Our team includes a diverse group of individuals with extensive experience investing in and managing real estate assets. We’ve built a team of creative and diligent professionals focused on building trust and relationships throughout the industry and within the communities in which we invest. Individuals operate with an entrepreneurial spirit within an institutional framework in order to generate market leading results. 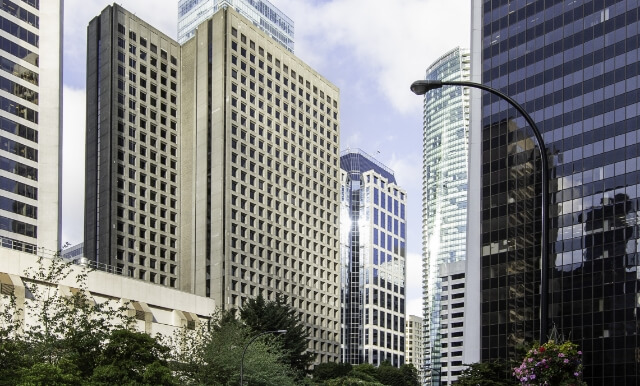 A Class A, 348,000 SF, 26-storey office building in Vancouver, BC. Located at the corner of West Georgia and Thurlow Streets, one of the busiest intersections in downtown Vancouver, the building has a diverse tenant roster with an adjacent 226-stall six-level parkade. The building was designed by renowned architect Arthur Erickson and is presently one of the most recognizable buildings of Vancouver’s skyline. Located in the heart of Toronto’s financial district, this 540,000 square foot Class A office building is close to the corner of King and Bay Street with direct access to the path. This 25 storey office tower is recently renovated and LEED EB Gold and BOMA BEST Gold. The property has a roster of quality tenants and is well-served by a variety of retail amenities and transportation options. A 675,000 square foot technology office park strategically located at the intersection of Steeles Avenue East and Highway 404. The campus has state-of-the-art technological infrastructure and attributes exceeding those found in competitive projects. The property has been improved with a sports field, sport court, and restaurants to enhance the amenities for employees of the campus. The Park is comprised of four fully leased, Class A industrial buildings totaling 731,000 square feet. The state-of-the-art, multi-tenant industrial park was built between 2018-2020, sits on a 38.9-acre site, features 32-foot clear heights, has over 150 loading doors, and an abundance of parking. Tenants include Amazon and DSV Solutions. A 327,000 square foot state-of-the-art distribution and warehouse facility fully leased to The Brick. It is located near Anjou industrial park approximately 10 miles northeast of the City of Montreal. The property has a clear height of 40 feet with 88 dock doors, three drive-in doors, and 105 trailer drop stalls. A 126,000 square foot, Class A state-of-the- art “LEED Silver” industrial building, strategically located within 20 minutes of downtown Montréal in the City of Pointe-Claire, at the junction of highway 20 and 40. This property has a clear height of 32 feet with 10 dock doors and one drive in door and is 100% leased by WESCO Distribution Canada LP. The Portfolio consists of 20 multi-residential properties with a total of 761 units located in Metro Vancouver. The properties are situated in core locations within prominent neighborhoods, offering superior walkability, access to transit, major employment, recreational amenities, universities, and downtown Vancouver. A newly constructed 104-unit purpose-built rental building in Vancouver, BC. It is in the growing Collingwood neighbourhood in the Kingsway Corridor. It benefits from excellent access to public transit via two SkyTrain stations on the Expo line and nearby amenities such as Starbucks, Swangard Stadium, Central Park, local restaurants, banks, and more. Consisting of four apartment buildings totaling 439 units in Saint Jérôme, a suburb 60 km north of Montreal. The buildings were constructed in phases over time from 1987 to 2019. Manoir Philippe Alexandre offers a sense of community, easy access to daily essentials, and entertainment. A newly-developed 169,000 SF grocery-anchored shopping centre, situated in Stoney Creek, ON, between the cities of Hamilton and St. Catharines. The property has direct exposure to and easy access from the Queen Elizabeth Way (QEW), making it an ideal stopping point for commuters travelling to/from each of Toronto, Hamilton, St. Catharines, Niagara Falls or the U.S. border. Tenants include Metro, LCBO, Dollarama, RBC, Pet Valu and Bulk Barn. An iconic retail property located in the affluent residential Toronto neighbourhood of Rosedale. Formerly a Canadian Pacific Railway station built in 1915, it is one of the most recognizable structures in Toronto. Located at the corner of Yonge Street and Scrivener Square, this 35,283 square foot property is 100% occupied by the Liquor Control Board of Ontario (“LCBO”). A 112,000 SF grocery-anchored community shopping centre. It services a trade area of approximately 154,500 people, drawn from the city of West Kelowna through the communities of Peachland to Summerland. Westbank Towne Centre also drives traffic from the Okanagan Connector off the Coquihalla Highway. Major tenants include Save-On-Foods, Shoppers Drug Mart, Home Hardware, BC Liquor Store, Starbucks, and Scotiabank.

Our team includes a diverse group of individuals with extensive experience investing in and managing real estate assets. We’ve built a team of creative and diligent professionals focused on building trust and relationships throughout the industry and community. Individuals operate with an entrepreneurial spirit in order to generate market leading results.

We’re committed to attracting, retaining and motivating a talented team and we’re always excited to meet capable, passionate people who are looking for the next step in advancing their careers at a growing real estate firm.

Crestpoint today announced the acquisition of 121 King Street, a 540,000 square foot, Class A office building located in Toronto’s financial district, one block from the corner of King and Bay streets.

Crestpoint is pleased to announce it is expanding its product offering to include a dedicated commercial mortgage strategy. The Strategy will be led by Blake Steels, Vice President, Head of Mortgage Investments.

Crestpoint is committed to engaging in responsible corporate behavior as it relates to environmental, social, and governance (ESG) concerns and seeks to make investments that not only generate superior returns for its investors but have a positive impact on the communites, environment, and markets in which they operate.

Crestpoint has a comprehensive ESG Policy which guides our processes and strategic thinking in our investment and asset management activity. The policy highlights how we underwrite and manage our assets to maximize long term investment returns and the health and wellbeing of our communities.